Dragana’s Master Thesis published by the Institute for culture studies and oriental languages (University of Oslo): 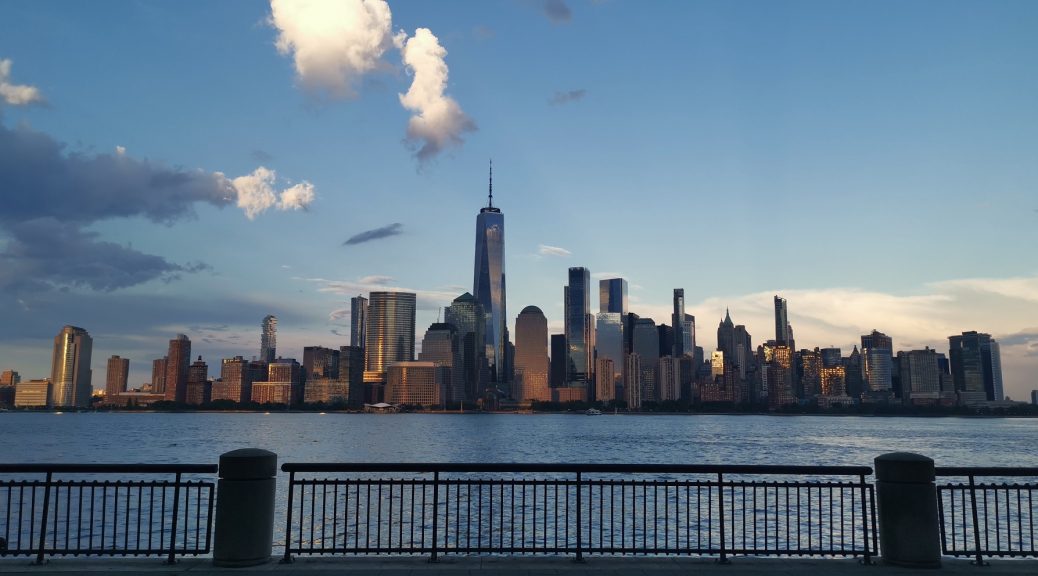 The broad avenues of New York City, shiny and magnificent “Big Apple”, hear the steps of uncountable number of European travellers every day. For many of them, it is likely neither the first, nor the last time to visit the city. Those in question already know the drill: queuing for the passport check after hours onboard, ladies feeling their skin getting dry and hair messy before being taken a photo of at the counter, and gentlemen with eyes sore of never enough of sleep. And all of them with a mobile in their hand (god forbid there was no internet on the plane!)

The next step: finding a drive on a popular app to take them to their long-awaited accommodation (also booked through a popular app). What follows next couple of days is a well-known routine to many: checking MyTransit app and subway rides (watching pretty much most of the time not to step on someone`s foot), sightseeing on Manhattan and climbing up the famous Rockefeller/Empire State Building/One World Trade Center for the best view and photos for a famous app, dining at diners, unforgettable “Broadway” and hockey game experiences and an app-ride back home when too tired to wait for the subway.

Arriving in New York to stay as a resident, however, is a completely different experience. It takes a village to fit into the logistics of moving from a smaller city somewhere in Europe to a huge metropolis, one has only visited as a tourist or maybe only heard of through popular culture products before.

One slowly, on daily basis, learns about the city and the reality which is much beyond the scenes depicted in movies or books. Yes, it is exciting and chaotic and noisy and fast. However, the diversity, not only of its population, but also of its five boroughs and suburbs, is never enough introduced to cultures to other continents.

After a seven-day MetroCard is replaced with a 127-dollar-monthly one, one becomes a daily subway commuter. One might see people with paperback novels reading in peace for almost an hour of ride. Or a grandfather showing a young girl the surroundings of Queens in sunshine, once the subway train goes above ground. Or a tired worker on a long ride to Bronx who slowly falls asleep on a subway`s bench. He quickly awakes and apologizes, smiling to people next to him. Or one might simply find oneself stuck with a mix of tourists and New Yorkers, with no need to hold a handle (which handle?) and no place to look but down at all the feet – on the way to 42nd street, close to Times Square and its lights.

And soon, there might come a day, when one wants to take a Saturday off to feel like a tourist again. To stand in line for the “Top of the Rock”. Or in front of the TKTS office to get the best discount for a Broadway show. Or to climb once again, like in the old days, one of the skyscrapers and take the best photo, for a famous app.

My research findings resulted in an article, which was published by the University of Oslo: https://www.hf.uio.no/ikos/english/studies/voices-middle-east-asia/voices-from-east-asia/treasury-of-chinese-culture-and-heritage-in-americ.html 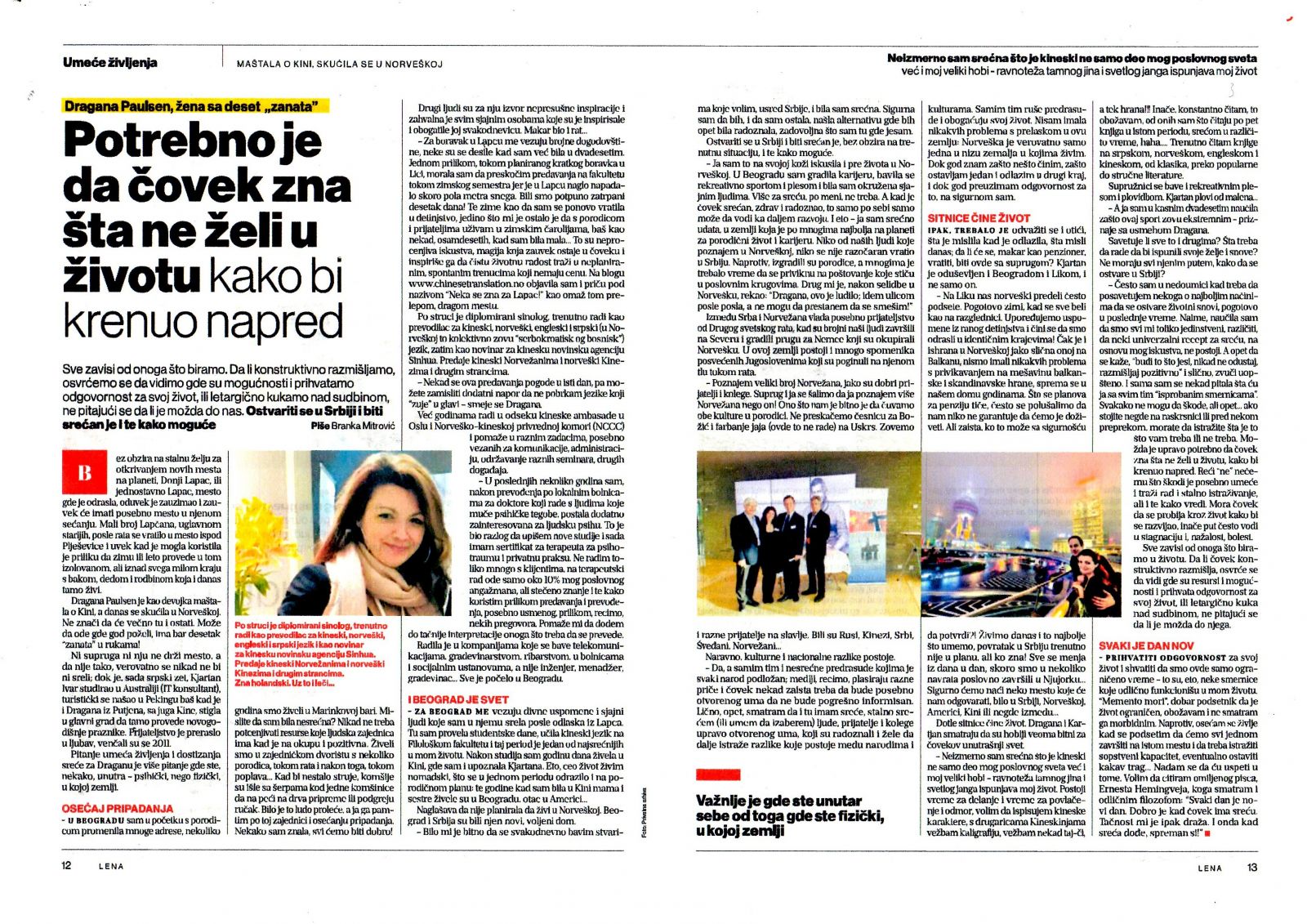 Together with NCCC Team 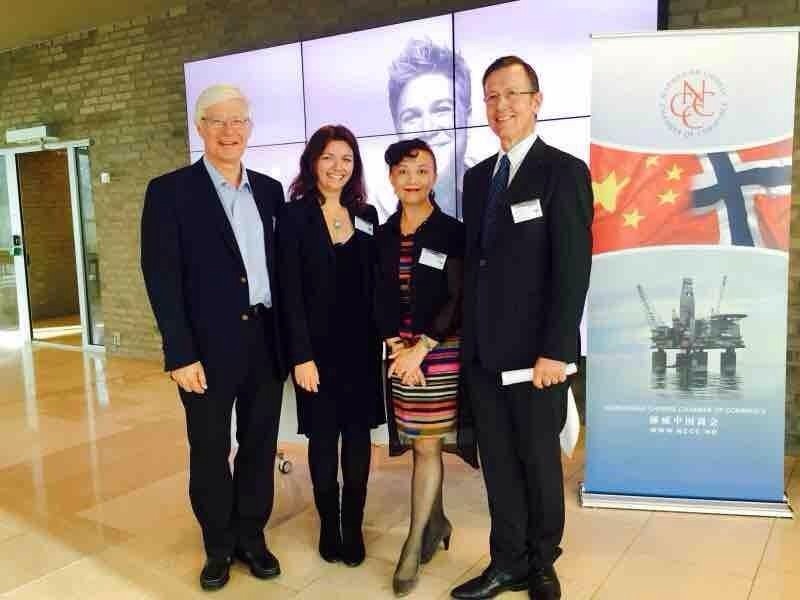 “Dragon” + “ana”, ya. The person is even cooler than the name, and this interpreter speaks Serbian, Chinese, English, Norwegian and Dutch

One of Cadence’s interpreters Dragana joins me for a fireside chat. We discuss normal things: everyday life, Ernest Hemingway, Salmon and Desert Island.

Dragana, let me first point out that Dragana is a ridiculously awesome name.

Thank you. Working in the professional world I often go by Lana, an international nickname that’s a bit easier to pronounce. Dragana is pronounced something like “Dragon + na” with a slight furling of the tongue on the Dr part.

Who is Dr(tongue furl)agana? Where are you from, how was your childhood, what are your interests?

I was born in Bosnia and grew up in Croatia and Serbia where I studied Chinese from 2000 to 2004. I have always been fascinated with languages, communicating is something I do well and I think I do it better than other things. As an interpreter you work with people, which is very enriching and also a good way to make a living. I see it as win-win on many levels. 😊

I was always interested in their exotic characters and Chinese philosophy. It was compulsory for students at my university to take two languages, I chose Chinese as my main area of focus and Dutch as a side project. So it would always be Chinese lectures in the morning and Dutch lectures in the afternoon and evening. I was even lucky enough to study in Belgium on scholarship for a bit. That being said the University of Belgrade was where I studied Chinese language and literature. At the same time I also became very passionate about journalism. I wrote for a local paper in Serbia while studying in 2002 and now I work as a freelance journalist for Chinese media in Norway. I was lucky enough that my Chinese teachers at Belgrade were very passionate about teaching and introducing Chinese culture to Serbian students. We did tai chi together in our spare time with our Chinese professors and made dumplings for Chinese New Year. After graduation I got a job offer to work as an English teacher in Fujian province so I moved to China in September 2005 and stayed there for a year until September 2006.

I ended up taking the HSK three times, two of the three times while studying at Belgrade and the last time in China. After my time in China I returned to Belgrade where I worked for a few Chinese companies across various industries like telecom, building and trading.

Yes…In 2009 I moved to Oslo. It’s actually interesting to note Norway and Serbia have a very good relationship dating back to WW II, Norwegian food is quite similar to food in the Balkans, especially the mountain areas in Croatia where I grew up. You know Eastern Europe is famous for meat and potatoes but Norwegian food is just as delicious!

I have had Norwegian food once before and all I remember is that it was incredibly sweet.

Not sure but that might have been the tyttebær sauce (English: Cowberry, Red Whortleberry, Lingonberry, Lowbush Cranberry, Mountaain Cranberry, Partridgeberry, Red Billberry, Rock Cranberry) with mashed rutabaga: its a traditional Norwegian Christmas dish usually served with lamb meat, sausages.

How was the switch from Serbia to China to Serbia to Oslo?

People here are so friendly and have a different way of thinking. Culture shock is quite normal when moving to a place you’ve never been before. It is most times unavoidable to experience culture shock and it is interesting to note that people moving to a new place often experience the same kind of psychological states known as psycho-stages: enjoying the exotic, glorifying the homeland and full integration.

It goes a little something like this: 1st year is falling in love with the exotic culture, 2nd year is glorifying your own country and comparing it to everything that you see around you and 3rd is full integration.

{Gurgle}. I have lived in Beijing now for 10 months so in two months I should technically be moving into the second phase of integration?

Well, you might feel culture shock here and there, that is natural. But you are from America, right? I believe you will not have a difficult task in finding something to glorify your country for, considering its natural diversity.

What types of journalism do you like to cover?

Culture, health, education and social everyday life because I think these are the most important. I have a lot of freedom and feedback for covering things I want to cover, I have only been here for 3 months and there is a lot of communication between me and the news agency. My colleagues and I often communicate in Chinese when preparing the articles but I write in English for Xinhua. That being said, Norway doesn’t have any toupee-turning stories, it isvery stable. There are no big breaking news stories. theres 10 political parties but it is nearly impossible to decipher the differences. In spite of the recent oil crisis as you know, the economy is good compared to the rest of the world and salmon prices seem to be eternally going up up up.

YES! There is a place called Dinner which is the most famous Chinese restaurant, I believe! Chinese friends that live in Norway probably have other good suggestions about where to go to eat good Chinese food the first people that migrated from China to Norway, had to cater the cooking to the local palate. Actually the first migrants from China mostly started their own restaurants, and a lot of them are still around so you know it’s good.

I have been subconsciously steering the conversation back to food this whole time. I will try to get back on track but if I mention food one more time please tell me to shut up. Ok. What is it like working for Xinhua?

Its actually different than my prior journalistic experiences. Back when I worked in Belgrade as a journalist, I was a local there and worked full time. Now I work for a international agency in a foreign country, it is quite special. As for my side-hustle, I work as a part-time freelancer and we cover happenings that are of interest for foreign communities; for example there is an annual culture festival here in Oslo during August called ERAS where people from all over the world gather in the city center and show their traditional costumes and food from their home country.

Desert island: you can bring three books with you on a desert island and those will be the books you will read for the rest of your life, what are they and why?

OOo, tough question as I am constantly reading. 1. Ernest Hemingway (for his short stories and even shorter sentences), 2. something psychology (not the self help kind, something more professional, maybe how the human psyche works), 3. third book could be something of a female author I really like, her name is Marija Jovanovic, she studied psychology as well and has a beautiful writing style. She knows how to express her self through only a word of two, something like Hemingway, but also uses long sentences. I could say that I like to read Hemingway because of his journalistic background and Jovanovic because of her psychology background — might be that is what makes me so connected to them when I read their work.

When you are doing business in China, why not hire the best China interpreter in your city? With Cadence, Chinese translation services and Chinese interpretation services is as simple as a click. Get automatically matched with the best interpreters and translators in the world, like Dragana ☝️.